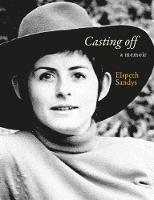 Casting Off begins on the eve of Elspeth Sandys’ first marriage in Dunedin in the 1960s where she says, ‘Presbyterianism is in the air you breathe in this town. It is also, and always will be, in my bloodstream’.

This is the second volume of her memoir, the first What Lies Beneath, explained her interesting and challenging background and childhood.

I checked the the difference between an autobiography and memoir before I could write the review, and I learned the autobiography is a chronological recording of the person’s experience while the memoir relies more on the author’s memory, feelings and emotions
Sandys herself says, ‘I will try to stick to the facts, avoiding invention but guided, as I cannot help be, as I have always been, by imagination’.

I have not read the first volume but found this an interesting read and was able to pick up the facts of Sandys early life as the book progressed.

After her marriage the couple left New Zealand to live in England where they enjoy the arts and theatre scene. However, work is intermittent, and by 1968 she is divorced and back in New Zealand with a daughter.

The book is supported with photographs supporting many of the significant events in the author’s life. Many of the earlier photos are black and white but there are also a number of more recent coloured snaps, including The Long House, a home she lived in London during her next marriage.

I enjoyed the inclusion of poems appropriately slotted throughout the book which shows the versatility of Sandys writing.

She has published nine novels, and two collections of short stories as well as numerous original plays and adaptions for the BBC and RNZ, as well as scripts for film and television. She now lives in Wellington, has two children and six grandchildren.