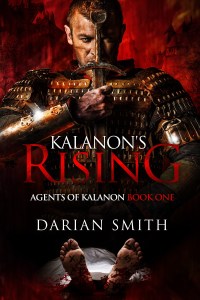 Darian Smith is a very talented writer, one whom I would rank on par with Brandon Sanderson and Peter V. Brett. His plots are engrossing, his settings highly developed and he has a real knack for immersing you fully into the world.

Kalanon’s Rising is both a murder mystery and a powerful fantasy novel, and Smith displays a considerable amount of talent and imagination at penning both. There are red herrings, false leads, plenty of unexpected twists and illuminating discoveries. Plot holes are skillfully plugged, and tangled webs are woven. He doesn’t go light on the shock and brutality either. Not only that, but Smith really understands the psychology of his characters, and they are all deeply developed and unique.

Sir Brannon Kesh earned the name Bloodhawk during the brutal war against the Nilarian people. He has since put that name, and his past, behind him, building a new life as a physician. He has recently, and somewhat reluctantly, taken on an apprentice − pretty, young Jessamine. However, his other life calls him back when the king’s cousin is violently murdered, the rather-disturbing crime scene suggesting that dark magic is involved, dark magic, and possibly a conspiracy against the crown. Charged to solve the crime, and possibly even save the realm from political disaster, Brannon assembles a small and rather unlikely team.

There is Magus Draeson, the centuries-old mage who helped turn the tide of war, now sporting a younger, handsome body and enjoying the frivolities of the life that comes with it; Taran, a socially awkward priest with an unusual obsession and unorthodox methodology and Ula, a shaman with the understanding − and ability − to bring corpses to life as powerful Risen warriors. Added into the mix is Ylani, the Nilaran ambassador and someone who has real reason to dislike the monarchy, and Letricia, the victim’s widow. As the corpses start to pile up, things become desperate and the kingdom of Kalanon could fall to ruin, or worse.

If you enjoy murder mysteries, intriguing and diverse characters, a gripping story line, conspiracies, and a bit of blood and gore, then you’ll love Kalanon’s Rising. Not only that, but it’s the first in the series, and I really look forward to reading more.