Stella Chrysostomou and Thomas Koed have just opened VOLUME, Nelson’s newest bookshop. Between them, they have decades of experience in bookselling, and Stella has been on our board for many years. Here is what Stella is buying for her friends and family this Christmas.  And you can win them: just tell us one book you plan to buy for Christmas in the comments, and/or over on Facebook!

After hearing Edward Carey at the Auckland Writer’s Festival in May, I was fascinated by his description of the world of the Iremongers, and this has been the find of the year for intriguing and excellent children’s writing. The third in the trilogy, Lungdon, has just been published, but start with Heap House. In the opening pages we are introduced to the unusual Iremonger family, who live on the outskirts of London where they collect and sift the rubbish which has grown into great moving heaps with a life-force all of its own. Meet Clod and the serving girl, Lucy, and begin an adventure of twists and turns, the unexpected and surprising. The language is captivating, the world is fascinating and the plot is both philosophical and beguiling. Great as a read-aloud, for summer family reading, and for 12+. Sarah Forster interviewed him earlier in the year, if you are keen to learn more.

Recently released, Catherine Chidgey’s The Wish Child is a stunning portrayal of war-time Germany through the eyes of two children, Sieglinde, from a middle-class family in Berlin, and Erich, from a farm near Leipzig. Theirs is a story of secrets, fear and overwhelming loyalty – for both the right and wrong reasons – a story that plays out in an atmosphere of paranoia and loss. Yet there is beauty in the small details and the happenstance relationship between Sieglinde and Erich. Chidgey’s novel is reminiscent of Jenny Erpenbeck’s End of Days; it’s beautifully crafted, building tension and foreboding and never letting the reader off the hook. The narrator’s voice is one of haunting sadness, all-telling yet allusive. The Wish Child is a must-read for this summer.

If you are looking to keep abreast of developments in contemporary NZ art, go no further than Anthony Byrt’s This Model World. Immensely readable, Byrt combines serious art discussion with his own personal take on our contemporary artists, as well as letting us into his world as a critic. Drawn from interviews conducted at the artists’ studios, the conversations flow and we are given an insight into what compels these artists to make, how they frame themselves in the world, and the ideas they discuss through their work. Artists include Shane Cotton, Judy Millar, Peter Robinson and Yvonne Todd. This Model World is remarkable in its ability to be simultaneously very personal and informative, with Byrt intertwining his own life into these observations about art and the place of art in our lives.

Big ideas can come in small packages (a principle we represent at VOLUME!), and the books in the excellent ‘Object Lessons’ series published by Bloomsbury each take an everyday object (bread, hood, password, bookshelf, silence, &c) and explore the deep strata of meaning and cultural resonance inherent in that object but to which we are usually blinded through familiarity. Favourites read so far include Hotel by the incomparable Joanna Walsh (which correlates the breakdown of her marriage with her time spent as a hotel reviewer, and plays rigorously with the idea of the hotel and with the idea of home that is its complement and shadow) and Dust by Michael Marder (which explores the philosophical weight of the universal substance which is comprised of things that have lost both identity and form). 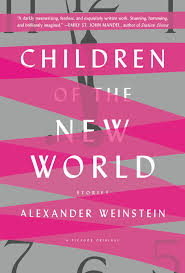 Children of the New World, by Alexander Weinstein (Text Publishing) 9781925498387
The debut short story collection, Children of the New World, is the brainchild of American writer Alexander Weinstein. The opening story, ‘Saying Goodbye to Yang’, sees a family sitting around the dining table watching Yang, a sophisticated big brother robot, malfunction. In the story ‘Children of The New World’ a couple live a virtual existence, complete with two perfect children, a nice suburban house and everything is wonderful until they venture into the Dark City. Their adventuring brings a virus into their perfect world, creating chaos. Many of the characters in the stories are disconnected from each other and from place, addicted to their programmes, technological implants, computer generated improvements and virtual worlds. Weinstein gives us wry stories – many are darkly funny – which question our obsession with technology, social media, perfection, identity and our desire to recreate ourselves. Set in a near-future this collection is both entertaining and thought-provoking.

Hand-Coloured New Zealand is a stunning publication from the dream team of Peter Alsop and publisher, Potton & Burton. From 1945, Whites Aviation produced the best hand-coloured photographs. This book is a tribute to the expertise of the company that produced these works, to the photographers and colourists whose work was exquisite. There are in-depth chapters about Leo White, the company founder; Clyde Stewart, chief photographer and head of colouring; and my favourite entitled ‘One of the Girls’ about Grace Rawson and her work as a colourist at Whites. The book is generously illustrated; many images will be familiar, either glimpsed on an aunt’s wall or as large-scale photographs in public buildings. This beautifully produced publication is a must for collectors, photographers and for anyone interested in New Zealand’s social history.