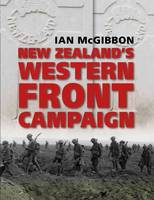 Among many qualities of this book, two in particular stand out. Firstly, Ian McGibbon places New Zealand’s rightly praised efforts on the Western Front with between 70,000 and 100,000 men in the full context of the of the massive efforts of Britain with five million men plus many millions from France. As well, McGibbon sets out to debunk many of the myths that have crept into the kiwi World War One narrative.

For instance, he explains away the assertion made by some other historians that Lieutenant-General Godley, commander of the New Zealand Troops, was responsible for the tragedy of the New Zealand losses at Passchendaele. It has been suggested that Godley, knowing that preparations for the battle were not up to standard and thus the attack would likely fail, did not refuse orders to attack from higher command. Rather, it has been said, that Godley put his own career ahead of his men’s welfare to “please his Commander-in-Chief”. McGibbon points out that Godley, like any other soldier, was required to obey orders and if he did not he would have been replaced by someone probably a British officer, who would carry the attack.

There is much more in this extremely well-published book than the debunking of myths and ensuring a realistic assessment of New Zealand’s efforts in the wider context of the Western Front. McGibbon, of course, is hugely thorough in his research: he has long established a fine reputation for this, not least with The Oxford Companion to New Zealand Military History (ed., 2000). However, he writes in an easy style and while this book is “big”, being A4 size and 408 pages inclusive of notes, bibliography and index, it is very readable.

The book is structured in chronological order, with chapters focusing on key battles such as the Somme and Passchendaele, Messines (1917) and Le Quesnoy; the latter two being victories for the kiwis. But the book is much more than an account of battles. It traces the whole New Zealand effort from the time the New Zealand Division arrived from Gallipoli in great detail, its structure, its training, health and welfare. The New Zealanders were required to work with other nations’ forces and a whole chapter is devoted to “Coalition Warfare”. The home front, “Sustaining New Zealand’s Effort” is also detailed, inclusive of the arguments for and against and then, final introduction of compulsory service.

The illustrations in this book are impressive. Unfortunately there is not a separate index of them, but they are included in the page index. The maps in particular are a feature: in colour and very easy to follow. Most have been prepared especially for this book, although there are original battlefield maps as well. The large format of the books enhances the illustrative content which not only includes many photographs sourced from overseas and not previously used in New Zealand publications, but also some of the best of the art from the war.

This publication was supported by The Ministry for Culture and Heritage’s War History Trust as part of the First World War commemorative project by the Ministry of Culture and Heritage and launched recently at the Beehive where I met and talked with author, Ian McGibbon. After 40 years working as a military historian for various government agencies, finally as General Editor (War History) at the Ministry, Ian spent about four years meticulously research this book. In his speech at the launch he made mention of this research method being instilled into him through the example of Major General Sir Howard Kippenberger who was appointed Editor-in-Chief of New Zealand’s largest-ever publishing project, the Official History of New Zealand in the Second World War 1939–45. Kippenberger set a high standard for the official histories, refused to contemplate censorship and demanded objectivity by his authors and editors. Principles which, by the example of his latest book, McGibbon has clearly absorbed.