Peace, not war, shall be our boast,
But should foes assail our coast,
Make us then a mighty host,
God defend our free land.
Lord of battles in Thy might,
Put our enemies to flight,
Let our cause be just and right,
God defend New Zealand. 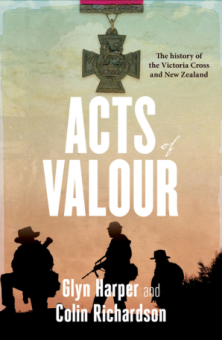 The seldom-sung third verse of “God Defend New Zealand” is a poignant reminder to all of us what it means to be a New Zealander. These words struck a chord when I read them on the first page of this book.

The original Royal Warrant for the VC, signed by Queen Victoria on 29 January 1856 specified that the award was to be made to ‘to those officers and men who … in the presence of the enemy shall have performed some signal act of valour or devotion to their country’. By a consolidating warrant of 1920, the criteria for receiving a VC was redefined to read ‘ for most conspicuous bravery or some daring or pre-eminent act of valour or self-sacrifice or extreme devotion to duty in the presence of the enemy.’

There have been more than 40 service personnel with New Zealand connections that have become recipients of the Victoria Cross for outstanding acts of gallantry; the first one awarded to a New Zealander was to Captain Charles Heaphy in 1867; Charles Upham received two, one in 1941 with his second in 1942, and our most recent one on 26 July 2007 to Willie Apiata.

Heroes come in different guises but all have one thing in common – bravery without any thought to their own safety. The stories of these brave, brave men are ones that should never be forgotten. The sacrifices they all made fighting for freedom make me proud to be a New Zealander.

The process of being recognised with the Victoria Cross is not an easy one. The Victoria Cross requires an act of gallantry to be witnessed, investigated by a commissioned officer, and written up so that it meets the requirements of the prevailing warrants. It then has to be passed through several layers of military command and various committees until it finally reaches the sovereign for his or her approval. Posthumous awards were not originally covered by the Victoria Cross warrant but this has changed over the years and in more recent times awarded posthumously to soldiers during the 1982 Falklands campaign.

The stories highlighted in this book are ones of extraordinary human beings.

This is the 10th anniversary edition of a best-selling book updated with the story of Willie Apiata and the bizarre theft of the VC medals. While I found some of the military history a bit over my head, it’s still a fascinating read and one that I certainly would recommend highly to readers.

Acts of Valour: The history of the Victoria Cross and New Zealand
by Glyn Harper and Colin Richardson
Published by HarperCollins NZ
ISBN 9781775540502