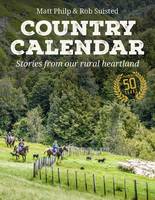 There are some things in New Zealand which seem to acquire the label “iconic” – think the likes of Marmite, Buzzy Bee, Black Singlets and the Kiwi. This book celebrates another member of that group, Country Calendar. This year, the TV programme celebrates 50 years of keeping the New Zealand public informed about what happens down on the farm. While the T.V. series screened old footage and revisited earlier farms, this book brings the stories together in an easily accessible read.

The introduction is an essential part of the story as it recounts the growth of the programme from an initial 13 programmes a year to 40. New technology has also changed the way scenes are shot and certainly made it easier to capture images. Some tales are told of dangerous escapes in the early days of shooting the footage. But above all, this chapter introduces us to the people, both on screen and behind the scenes. Frank Torley is an integral part of this story, not just as Mr Country Calendar, but also as he directed, produced, reported and fronted so many of the shows. The style of the programme as well as the vision of what was relevant has also changed. From an initial traditional farming stance, a wider view included fishing, organics, sustainability and lifestyle farms. This chapter also shows how the focus has changed from the land to the people and perhaps this is what enabled the show to screen across generations.

The book then presents 15 stories based on programmes screened over the 50 years. Some revisit the same farm twice or even three times. The Hinton’s stonefruit orchard near Earnscleugh, near Alexandra, was a wonderful example of this. It includes a photo from the 1961 Women’s Weekly, and a recreation of this image by the current family. Here the focus on family, on heritage but also on change was especially evident. Market forces have meant big changes in the farming sector as cheaper imports force farmers to adapt.

The stories are arranged in geographical order, starting from the top of the North Island and finishing in Blueskin Bay on the Otago Peninsula. Each story has a different focus, in the same way that the T.V. shows were presented. Stu Muir farms in the Waikato and his work regenerating the waterways enables whitebait and ducks to flourish. He gives the reason for this as being his love of shooting and whitebaiting, but there is an underlying love for the land coming through his story. The adaptation by each generation is evident in the script. As Mike Barton from Lake Taupo comments, “Previously I thought I was just a farmer. Now I feel like a farmer, a scientist, an environmentalist and a policy maker all rolled in to one”.

I grew up with Country Calendar as a part of my week. My father comes from a farming background, my sister and her husband were featured in one programme and I have always been on the receiving end of comments relating to the programme each week. Sometimes the episodes were a bit new age, others were too organic, but always they elicited an opinion. I loved this book. The text is informative, engaging and very much a New Zealand expression of how we weave our lives with the land. The people are what make the stories but the photographs give us the vision. They are superb. This book is well timed as a Christmas gift to anyone who loves to acknowledge our farming heritage, in the past and into the future.