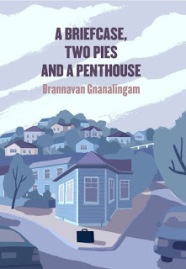 It’s Rachel’s first day at her new job at the central security agency, the New Zealand Alarm and Response Ministry; a job she seems to have landed almost by accident, there being few other long-term contracts in the public sector. Her first task is to investigate the daily activities of a suspected terrorist, whose main “crime” seems to be having a foreign name and visiting the Middle East.

This is the GCSB meets Yes Minister or Gliding On (for those of a certain age who remember those TV shows). Rachel spends much of her time carefully navigating office politics and acronyms, sidestepping lascivious colleagues, and fake-laughing at racist, sexist, homophobic boys’ club banter.

Anyone who has worked in an office environment will find some cringingly familiar and humorous moments in Gnanalingam’s portrayal of bureaucracy gone mad. I laughed out loud at a work lunch scene in which an aggressive meat-eater thoughtlessly and carelessly ate the quiche intended for the office vegetarians, while another took two chicken drumsticks claiming to be eating the vegetarian’s share. There are many such comical scenes which elicit a wry smile and a knowing grimace.

Gnanalingam writes on a strictly “need to know” basis. His prose is sparse with little in the way of description. I’m not a writer myself but I’m aware of a writing maxim that the words should “show, not tell” so as to allow the reader to experience the scene through senses and emotions rather than through the author’s explicit description. Gnanalingam neither shows, nor tells. He leaves his reader to fill in the blanks with his or her own imagination. For example, we never learn much about Rachel’s physical appearance beyond her having hair long enough to be tied into a ponytail. (Something of a dangerous hairstyle in Kiwi political circles, of course.) But this brevity keeps the book rattling along at a decent pace with a focus on the plot.

I desperately hope that A Briefcase is pure fiction and that Gnanalingam is a writer with a fantastic sense of humour, otherwise I despair for the state of our country’s spy agencies. This is a wickedly clever and very contemporary read from a promising Kiwi author. My only complaint is that it was over too quickly.

A Briefcase, Two Pies, and a Penthouse
by Brannavan Gnanalingam
Published by Lawrence & Gibson