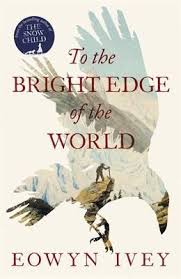 Beautiful writing depends on many factors: a desire to tell a good tale, interesting characters, a challenging setting, but above all, an ability to weave words through a landscape. Eowyn Ivey has done all this and more in her novel of exploration, love and cultural sensitivity s\set in Alaska in the late nineteenth century.

We find Lieutenant Colonel Allen Forrester commissioned to forge a new trail up the Wolverine River to the Yukon. While these place names may now be familiar after the gold rush, they were home to tribes and spirits from another time when he set off with his small group of men. The harsh environment plays an important role in this story, as do the tribes who cling to their seasonal territories. The relationship between explorer and Indian is based on a trust which is easily upset.

Left behind is Forrester’s young bride, Sophie. She also faces loss, loneliness and the pressure to resist her own intellectual curiosity. Her decision to develop her interest  in photography shows the challenges women faced when deciding to pursue activities beyond home and hearth.

The framing of the narrative is superbly achieved as an elderly relative of the Forresters’ seeks to archive the remaining family documents, back in the Wolverine territory. An unlikely friendship develops between the elderly, Walt, and Josh, the young curator of the museum, himself a Wolverine descendant.
A series of catalogue entries of artefacts and photographs as well as contemporary documents are interspersed between the chapters. This adds an air of authenticity which is deserved, as the research for this book was extensive.

I enjoyed the simultaneous stories and the way they all came together to create such a beautiful tale. Eowyn Ivey’s debut novel The Snow Child gave promise of more good reads to come. I was not disappointed.