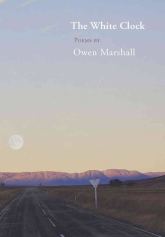 The White Clock flits from the everyday to the classical and then back again. In one poem, it brings the image of Socrates’ death to mind. Then another moves to capturing the feel of night traffic, of cars that are fireflies that pulsate “through the / dark galaxy”.

The opening poem portrays the white clock as a strong beginning image. The clock steadily moves through the minutes regardless of what’s happening around it; it is a countdown that cannot be stopped. However, time is no concern for Owen Marshall, when he can write snippets of history into his poetry and keep moments preserved through his words.

And so, time passes. There is an underlying current of nostalgia as people pass by, some leaving larger footprints than others. Freeze Frame is a short poem that encapsulates the movement of time, forever working onwards. Marshall beautifully describes how things are doomed to pass, “Everything so fleeting that it dips / and pales almost in the momentary flare / of its creation”.

Reverie Cascade is an interesting series of poems in which Marshall explores memories that are associated with certain settings. There is Te Kuiti, his familiar place of birth. And there is Anacapri, an island where Marshall juxtaposes the more ancient settings of Italy to the modern landscape he sees before him. I especially enjoyed Portsea B&B, a simple poem that describes the temporary state of travelling, encapsulating these destinations simply and profoundly as “A place to come to and also leave”.

Some references to the classical, however, felt a little forced. The first reference to “memento mori” felt fresh but by the third time, the unique little phrase had lost its magic. Some poems were so deeply wound in classical imagery that they felt out of place within the collection. It was hard to find a single theme when there were so many poems out of depth with each other; the breadth of scope was truly amazing but also overwhelming to take in at times.

I also would’ve loved to see a greater variation in verse, especially themes that could’ve been developed into longer pieces. My favourite poems were the pieces part of Haiku Sequence, which showed off another side of Marshall’s writing where, due to the format, it had to be more tight and secure. It was a sequence of beautiful and short imagery, of “sea drizzle” that glistens and clouds that “seem firm enough to support a / heaven”. They are small snippets that, together, form a longer poem that brings a place and atmosphere into being.

In The White Clock, Marshall brings the reader to all these different moments in time whether past, present, or imaginary. Although it gets a little lost within grand imagination, Marshall’s final poem feels a little like alighting on solid ground again. He captures the simple image of a little girl bouncing on a trampoline and innocently “smiling open-mouthed”. It is a simple frozen frame and from reading the collection, it is clear that the moment will pass and time will pound forever onwards into the future. But this beautiful and delicate image makes it feel like sometimes these little flashes are just enough.