One of our most successful fantasy writers, Helen Lowe, has recently released the third in her Wall of Night series, Daughter of Blood. We have a copy to give away, and our reviewer Tierney Reardon has provided us with these questions for her. Fantasy fans, enjoy.

1. What originally inspired you to write the Wall of Night series & who do you consider your biggest influences?
The Wall of Night series emerged from a convergence of moments. The idea of a twilit-to-dark, barren, and wind-blasted world had been with me for many years, before a chance heard remark, describing someone whose life had been lived like “a race along the edge of a precipice”, called up my first image of Malian of Night, scaling a precipice-like wall in a ruined keep. Malian is the main character in the series, and besides that initial image, the overheard remark also sparked a great deal of reflection (on my part) as to what a person whose life resembled a race along a cliff’s edge, might be like.

I was also a Fantasy and Science Fiction lover, so had been reading extensively in the genre since childhood—and what you enjoy reading tends to influence the sorts of stories you wish to tell yourself, I suspect. In my case I always point to the “seminal” influences of CS Lewis and JRR Tolkien (of course!), as well as a swathe of myths, fairytales, and legends, but also to writers from other genres. For example, historical fiction authors, Rosemary Sutcliff and Dorothy Dunnett, dystopian authors such as Aldous Huxley (Eyeless in Gaza, in particular) and Margaret Atwood (The Handmaid’s Tale), as well as classic writers such as Jane Austen and Leo Tolstoy – to name just a very few among many.

2. Which of the three Wall of Night books have you found most enjoyable to write?
They have all been enjoyable, just in very different ways that reflect the differences between the books themselves. The Heir of Night had the magic of being the first, with all the wonder and mystery of a story opening out.

But I loved the expanded world of The Gathering of the Lost, and the adventurous nature of the story, with its assassins and rooftop chases, tournaments and armoured knights. Daughter of Blood worked me very hard in terms of getting the story to the page, and although it has its duels and battles, the nuances centre on treachery and political intrigue. But if I had to pick one, I would probably opt for The Heir of Night because of the delight of beginning and then further exploring something new, which in Heir’s case was both the story itself and writing my first novel.

3. You’re best known for your fantasy works but you also write poetry. Are there other genres you’ve written in or considered writing in and, if so, which?
So far, when I’ve had an idea for a novel, it’s always been Fantasy. However, I’ve also had a number of short stories published, in a range of genres that include contemporary realism, recent historical (e.g. World War 2 settings), and legendary history, as well as science fiction.

4. Wall of Night is a complex and carefully constructed series. How do you keep track of
the characters, storylines, the lore and the geography of Haarth? 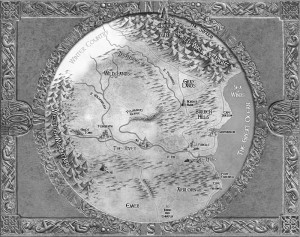 Mainly in my head, although I do have a number of tables where I record key facts, particularly about the Derai. I have also have a folder of sketch maps of the world—all very rough and as much scribblings as sketch, but useful when I need to provide locational clarity in the text. I also include a comprehensive glossary with each book, which is a cross between a compendium, a gazetteer and a dramatis personnae. I include it because I love glossaries myself, but also to assist readers since the series is complex—and when circumstances require, I consult it myself.

5. Would you say that in your latest book, Daughter of Blood, Kalan and Malian are faced with their greatest challenges in the series so far?
I had to p

ause for reflection regarding this question, because of course Malian and Kalan have already faced some steep challenges in The Heir of Night and The Gathering of the Lost. I think, though, that the circumstances in this book are a significant step up for Kalan, in particular. I shall leave it to readers to decide whether he meets the tests set before him, but believe it is not too much of a spoiler to reveal that single combats, military assaults, and large armed conflicts are in his cards. With respect to Malian, although she faces significant challenges in Daughter of Blood, it is more her realisation of the immense undertaking that still lies ahead that shadows her path through the story.

6. Without giving too many spoilers, what would you say readers can expect from Daughter of Blood?
In view of where readers left Malian and Kalan at the end of The Gathering of the Lost, I believe it would be reasonable to expect a return to the Wall of Night. I have already mentioned single combats, military assaults and large armed conflicts in Kalan’s cards, but believe readers could also expect Malian to be grappling with the implications of her new alliance with Raven and the House of Fire.

Readers can expect plenty of intrigue arising from the enmities between the Derai Houses, but there is also a four-hundred-year-old mystery to be solved – and of course the last of Malian’s inheritance of three legendary weapons to be found. I can also promise at least one truly glorious cavalry charge that beta readers would not allow me to cut from the book; the return of at least one character from The Heir of Night; and the introduction of two central characters, Faro and Myr (the titular Daughter of Blood) who are new to this book.

7. What are you currently working on in terms of writing projects?
That’s a very easy answer: The Chaos Gate, The Wall of Night Book Four, which will also conclude the series. I’ve also written a novelette in the past year, although it’s still very much a work in progress (and likely to remain so until The Chaos Gate is done.) 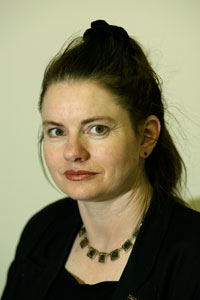 Recently, too, I’ve had three poems accepted for a new anthology, Leaving the Red Zone … poems from the Canterbury earthquakes, edited by James Norcliffe and Joanna Preston, that is intended for publication on February 22nd, the fifth anniversary of the February 22nd, 2011, Christchurch earthquake. As a Christchurch person who has lived through 2010-2011’s eighteen months of “awful”, and the subsequent five years of “recovery”, I do feel honoured to have my work included in this book.

Thank you to Helen Lowe, and to Tierney Reardon for providing the questions. You can buy Daughter of Blood now at any bookshop. And enter to win a copy by emailing info@booksellers.co.nz, subject ‘Daughter of Blood’ and tell us who you most enjoy reading from the Fantasy and Science Fiction section of your bookshop.