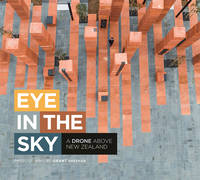 Drones. They’ve got a bad name. Drones invade our privacy. Drones bomb by remote control. Drones are bees without personality. Drones are boring. And drones are becoming ubiquitous.

Grant Sheehan has a different angle on the situation. Sheehan has put an eye in the sky and used it for artistic purposes, finding out how New Zealand looks from ten feet above ground level, from 400 feet above, from anywhere in between. The visual question this book asks is: Does photography from a flying quad-copter camera, or unmanned aerial vehicle (AKA drone), reveal anything new? In a country that has inspired a thousand books of panoramic photography, does elevation add to the viewing experience?

Elevation, Sheehan writes, transforms the image by making visible what was not visible at ground level; it enhances the context of the subject in its environment; and particularly at the beginning or end of a day, it adds long shadows that strengthens composition and highlights texture. The aesthetic proof can be found in the photos. The most interesting are those that reveal shapes, patterns and shadows that perhaps you wouldn’t make out otherwise. The cover photo of the Australian Memorial at Pukeahu National War Memorial in Wellington is the foremost example. Viewed from the vertical angle at 25.30 metres (Sheehan gives distance as well as latitude and longitude coordinates for each photo), the memorial becomes something else altogether, a piece of abstract art.

Some things work better than others. A list of the most compelling images might give some idea of successful subject material: the temporary fields of remembrance installation at Wellington’s Botanic Garden; kayakers on Porirua harbour; the Ratana church at Raetihi; Inferno Crater at Waimangu Volcanic Valley; Ruapekapeka Pa earthworks; and all decaying shipwrecks. 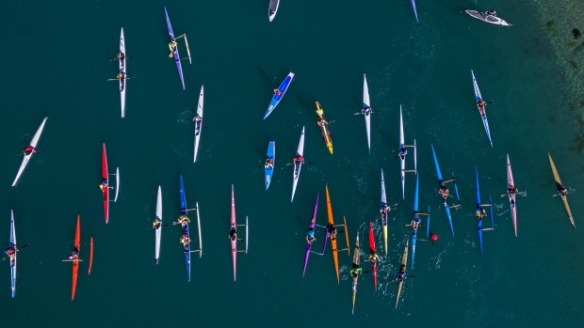 For me though, despite the beauty and revelation of many of the images, it is Sheehan’s discussion of ‘Drone Etiquette’ and ‘Future Drone’ that captures the attention. With users of drones (and other small unmanned craft) now requiring flight plans to be lodged with CAA and the permission of private and public landholders, rules have tightened up to the extent that model aircraft fliers have been hit hard — Sheehan suggests that common sense should prevail here. He also points out that people’s fear about the use of the drones for spying should be tempered by the realisation that modern digital cameras, CCTV and location-tracking smart phones are still a much bigger threat to our individual privacy.

As for the future of drones, Sheehan gives examples of two near-future applications: Amazon book-delivery drone, and household mail/small courier package delivery. Right now, the capacity for ‘object avoidance’ is being developed, as are protected GPS systems that can’t be hijacked or redirected, resistance to electronic or magnetic interference, and the ability to deal with random occurrences, recover and carry on with the mission. Sheehan speculates that “the enthusiasm for working drones will be driven by the huge cost savings to delivery companies, to agriculture users… and policing and traffic management.” In the near future, Sheehan believes, we will see automated drones everywhere — “they will become a familiar sight in the streets and suburbs of our cities.”

In his book that captures for the sake of beauty the geology and architecture of New Zealand, it is the verbalised vision of the future of drones, and by association the future of humans, that makes the most impact.

Eye in the Sky: A Drone Above New Zealand
Photography and Introduction by Grant Sheehan
Published by Phantom House
ISBN 9780994128508