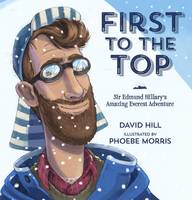 Then Ed looked up. There was more sky above them than before. The ridge ended in a round dome a few metres away. They took deep breaths, cut the last steps, and…’

First to the Top follows the life of Sir Edmund Hillary from when he was ‘a small, shy boy’ growing up in the town of Tuakau, to his world famous mountaineering feat: at 11.30am on Friday 29 May 1953, Edmund Hillary and Tenzing Norgay were the first two people to stand on the top of Mt Everest, the world’s highest mountain.

While, I would guess, all New Zealand adults know this story, young children may not. The book – a handsome hardcover – is written by award winning author, David Hill who, among his many achievements, was made a Member of the New Zealand Order of Merit in 2004. The illustrations are done by newcomer Phoebe Morris, and it’s a startling and exceptionally beautiful debut. Morris’s style reminded me of both Donovan Bixley and Shaun Tan, and she’s managed to capture the grandeur of the Himalayas, and the ‘everyday hero’ aspect of Hillary’s character. Hill’s retelling of the famous story made sure to emphasise the friendship between Norgay and Hillary, including when Norgay saved Hillary’s life after he fell into a crevasse: ‘They always worked together after that.’ Hill was also careful to note that it was both men – not just Hillary – who were first to the top: ‘They were on the summit.’

What I noticed while reading the book to my four-year-old son was a swelling of pride at, and there’s no other way to put it, the New Zealandness of the story. It led my son and I to talk about how to be in the world, which all of the best children’s stories do (and adult stories, for that matter). First to the Top: Sir Edmund Hillary’s Amazing Everest Adventure highlights a certain New Zealand identity: a desire to be in the outdoors, a curiosity that when combined with hard work drives us overseas and to greatness; our deep streak of sensibleness and humility. It is also quite funny in places; when Ed is knighted by the queen the book states, ‘He told friends, “Now I’ll have to buy some new bee-keeping overalls.”’

First to the Top was also a difficult story to tell without it becoming cluttered or boring – alongside the many facts, the story moves through countries, touches on different cultures, and spans decades. It’s also one of our most iconic stories. It is made relevant and enjoyable for most children by the perfect marriage between Hill’s words and Morris’s illustrations, and the depth of information they’ve included in these pages. It is easily the best children’s book I’ve read this year.