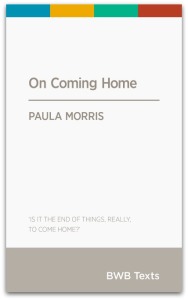 On Coming Home by Paula Morris (Ngati Wai) is one in the series of BWB Texts, billed by the publisher as “short books on big subjects from great New Zealand writers”. I’ll admit to previously having been put off the Texts by their covers, which remind me of corporate reports, and the price in relation to the size of the books. From now on, however, I will be viewing them with a much friendlier eye.

On Coming Home is Morris’s autobiographical exploration of what it means to be a Kiwi writer returning to Aotearoa after living and working overseas for many years. (She currently teaches creative writing at the University of Auckland.) As well as her own experience, she investigates famous literary exiles and the long tradition of New Zealand authors trying to decipher their literary selfhood in the face of the world, the Commonwealth, and particularly Mother Britain.

Morris writes intelligently about being a child of two countries: “Growing up, I believed that I had two homes. One was in Auckland, the place I was born and the place where we lived. The other was the ‘home’ my mother talked about: England.” This struck a particular chord with me – I also grew up in Auckland with an English mother who refused point blank to become a New Zealander. Morris continues:

“After I moved to England, in 1985, I realised – possibly within the first half hour – that I was not English, and never would be. And yet there was an Englishness in many of my traits and tastes and habits, etched into me by my mother, and the books I’d grown up reading, and much of the television we’d watched. Sometimes I felt cheated of the ‘real’ New Zealand childhood we’re all supposed to have had, involving sojourns in baches and eating pavlova, among other things.”

One of the interesting things about reading a novelist’s autobiographical writing is that it gives you an insight into their fiction. I didn’t realise until Morris mentions it in On Coming Home that she is also the author of the historical novel Rangatira, which I read a couple of years ago, and which won the NZ national book award for fiction in 2012. (Rangatira, set in the nineteenth century, also features a Ngati Wai protagonist who has moved from Aotearoa to England and back again.) The feeling I remember most from reading Rangatira was a sense of nervously trying to do justice to one’s ancestors; of a writer trying very hard to come to terms with the combined weights of history, whakapapa, and personal geography. In On Coming Home, Morris speaks of her experience writing Rangatira:

“Maybe I was arguing my own case as native fauna. Living overseas was deracinating; somewhere deep in my consciousness was the urge to fight against it. Where were my roots? Where else did I belong? … I had the impulse to keep my place warm, as my Grandma used to say, from both sides of the family … And I had the impulse to conjure up Auckland, the place I was from, to make it more than just the place I was from – to stand back, and try to examine it from afar in all its messy semi-splendour.”
(I had to look ‘deracinating’ up in my dictionary: it means tearing up by the roots – not, as I had first thought, being deprived of one’s race.)

Morris writes with an engaging energy and intellectual clarity that nonetheless seems fuelled by uncertainty: where she belongs, where is home, and what ‘belonging’ and ‘home’ even mean. “Perhaps I’m no longer really a New Zealander, no longer a New Zealand writer – whatever that means.” It’s a feeling that, understandably, seems to make her angry: “I don’t think the New Zealand government is going to soothe my rage with literary honours any time soon.”

By writing in a way that is simultaneously well researched (quotes and notes abound) and very personal, Morris manages the best kind of autobiography: an individual story that resonates across the New Zealand experience, and with anyone who has ever felt a conflicted homescape. On Coming Home is impossible not to take personally; a short, sharp 80-page essay that provokes intense reflection on where, after all, one belongs. Highly recommended.