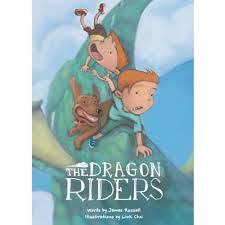 James Russell’s day job is as the editor of the New Zealand Herald’s Element – a sustainable business and lifestyle magazine. His two young boys’ insatiable demand for stories is the inspiration behind The Dragon Brothers Trilogy – The Dragon Hunters, The Dragon Tamers and this one, The Dragon Riders.

Link Choi is an Auckland-based illustrator and artist. He has illustrated two other books Unsuitable Weather and Gold in the Hills. He has been working more recently at Weta Studios in Wellington, helping bring to life The Hobbit.

This story begins with two boys Flynn and Paddy outside their home, completely unaware that dragons roamed their land, in startling quantity. That was until they got one for a pet. The trouble was, they didn’t know quite what to feed their pet. They gave their dragon the name of Elton John. He was kept in secret places until their mum had gone. It became much harder when the dragon grew and of course he’d almost reached the size of your average, clopping horse. He took off with them on board one day when they were playing. You can follow their journey by tracing their steps with the map on the inside cover of this book.

Having not read the previous two books in this series, I did wonder how this story would work on its own. Why I ever worried about that, I have no idea as the four-year-old I was reading this to fell in love with the idea of having a dragon for a pet. I got the distinct impression that if one was available at the local pet shop, she’d convince her mum to get her one immediately.

New Zealand’s native flora and fauna make a strong theme throughout The Dragon Riders, such as the flowering Pohutakawa and the native Karearea (Falcon), while the long-gone Pink and White Terraces also feature.

The illustrations are quite stunning, complimenting the wonderful story and being able to read this book to a child that got right into the story asking so many questions, it was a joy to read out loud.