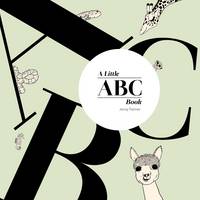 enny Palmer is an Auckland poet and illustrator. She has written A Little ABC Book using
crowd-sourcing in an interesting way – the animal for each letter of the alphabet was voted on by children, and the winner has made their way into the book. I think it’s this concept that lifts the books above others in the genre – the animals aren’t your all your usual dogs, rabbits, tigers and whales.

Including kakapo and wombats, the book covers an international pantheon of animals, including some that are more magical than others (unicorns, yeti!). Other interesting variations include tadpoles, flying squirrels and crustaceans. I’m surprised that Palmer chose to illustrate craneflies rather than spiders for Daddy Long Legs – both animals can be called Daddy Long Legs, but spiders are more commonly associated with the term.

The poems are clever, and each follows the same format of ABCB quatrains, which will make them easy to read aloud as the rhythm is generally consistent. Palmer is able to squeeze in both a sense of humour (the poems are often quite punny – a unicorn has a unique horn) as well as some interesting facts about the animals. She also makes full use of poetic devices like alliteration, which children love. For example:

As someone who teaches new entrants, the only quibble I have with the book – and this is true of so many ABC books and friezes – is that it only focuses on capital letters. It’s really important for children to be able to recognise both forms of each letter of the alphabet, and I wish more authors, illustrators and book designers would accommodate this in their work.

Don’t let that stop you from purchasing the book though. With charming line drawings and fun rhymes, I think many children from 2 – 5 would enjoy receiving A Little ABC Book for Christmas.