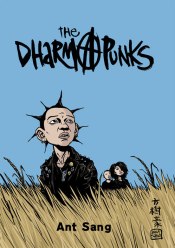 I was on the train today and a guy leaned over to inspect what I was reading. “What’s that like?,” he asked. I took pause and thought about it. “Well,” I started, “Do you know Jamie Hernandez? Love and Rockets?, Tank Girl, Gorillaz?” He nodded slowly, as the idea dawned on him. “Well it’s nothing like that.”

Back in 2001, fledgling cartoonist Ant Sang must have been at least partially inspired by the new comics that had been gaining momentum since the late 80’s. I know that fellow artist, Simon Morse, was hugely inspired by Hernandez’ anarchic reality. It was miles away from the underpants-over-longjohns superheroes that had dominated the industry up until then. Sang, like Morse, and of course, Dylan Horrocks, was interested in the more intellectual dichotomies that could be played out in the relatively new “graphic novel” medium.

New Zealand was slow on the uptake. Anyone who does get a reputation, after slaving long over a photocopier to produce enough zines to get noticed, is snapped up by the American comic empire – Marvel, DC, etc. Like those guys, Sang was a publishing pioneer, co-founding Tuatara Press with a collective of other cartoonists to release his first small work Filth. In Dharma Punks, this title appears again as the band name of a punk band, which is central to the story of Chopstick, a skinny Kiwi Chinese lad whose identity is intertwined with the fate and manipulated fortunes of the characters in the band – Benis, Jugga, Cat, Side Car and Brian The Goth.

It’s Auckland, 1994 and a group of anarchistic punks hatch a plan to explosively sabotage the opening of Bobo’s burger joint (think fictitious multinational McDonald’s). The night before their plan is carried out, Chopstick sets the bomb that will bring the joint down. But he gets separated from his partner in crime, Tracy, and the night takes a serious of unexpected twists and turns where chance encounters the past and the present. The spirit of Karma and the Zen of anarchy clash, they switch roles – the dragon becomes the mouse and the rodent roars and spits flames. Still reeling from the death of a close friend, Chopstick tries to reconcile his spiritual path with his political actions in this energetic, fast-paced story.

This release is the full collection of Sang’s work from 2001 to 2003, beautifully presented on good quality baxter stock (the holy grail for cartoonists because the ink bleed is virtually zero). It’s been touched up here and there, with new or restored introduction and end papers for each chapter – in simple colourings. The stories seem familiar to me, perhaps because I was an aspiring punk once too – although I never blew anything up. The raw emotion that Sang blends with the kind and rational teachings of Buddha is still refreshing and vibrant. His penmanship has an urgency, without abandoning aesthetics.

I have really enjoyed looking back over this period of Sang’s most inspirational work. Here’s hoping that the graphic novel reading community will demand more of him, and he delivers. Now that would be exiting news!