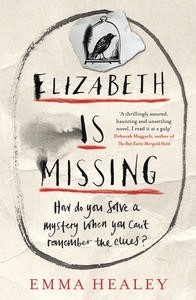 Wow, this novel is great, a stunning first novel, and reading all the media releases in the
UK on this book, the young author is a wonderful new talent. How can someone so young − the author is only 28 − write so eloquently and masterfully, but above all with such compassion about the issues of dementia in elderly people. Are there even many 28-year-olds out there with more than a passing interest in elderly people?

That is the first surprising thing about this book. The second is her ability to get inside the head and soul of an 84 year old woman and write so knowingly about what is going on in there. There is confusion, frustration, rage and anger, realisation that something is not quite right, and yet in her writing the author manages to hold all the craziness together with the lucidness.

With an ageing population, issues such as dementia and Alzheimer’s are just not going to go away and many of us, if we haven’t already, will be facing such issues in our own parents and maybe in ourselves or spouses. So often we see old age senility from the outside – as the child, grandchild, caregiver, spouse, neighbour or friend. Not as the person actually experiencing it. I have no idea if what is going on in Maud’s head happens or not, but by hokey, the author has created a very compelling and realistic character.

Maud is 84, a widow, still living in her own home with caregiver, Carla, popping in every morning, and her daughter Helen who is in her 50s, taking on the rest of the caring/supervising. Maud knows she is becoming a bit of a handful but can’t seem to fully realise why that is, or what should be done about it. Her major problem, at the moment, is trying to find her friend Elizabeth − another elderly lady − who seems to have simply disappeared. Maud asks everyone, all the time, if they have seen Elizabeth, and is a known face at the local police station where she regularly goes to report her missing, but of course she can’t remember ever doing so! So every visit to the police station is a first visit.

Her short term memory may be shot, but her long term memory is razor sharp. She begins to associate Elizabeth’s disappearance with that of her older sister in 1946 when Maud was 15. Sukey was married to Frank, and one day simply disappeared. No trace of her was ever found. In post-war Britain things were still pretty tough with rationing, people homeless after losing their homes in bombings, men or women traumatised by wartime experiences who seemed to simply run away with surprising regularity. Even as a youngster, Maud never thought that Sukey had run away, and now all these years later, it still preys on her mind.

The author weaves these two different worlds in Maud’s mind, as well as her interactions with the real world so expertly, so cleverly. As her mind continues to unravel, there are times when you really don’t know whether Maud herself is in the present or the past. It is terrific stuff, all told in Maud’s voice. A very ordinary lady who would appear to have had a very ordinary life, but has such a deep inner life as she tries to find where Elizabeth is.

Watching her interactions with her daughter, neighbours, medical people and others Maud sees in her day, we also get a picture of how heartbreaking losing one’s mind is to those watching, the pressures and stresses they deal with in looking after someone like Maud. And all from the pen of a 28-year-old. Amazing.