The full series is available in bookstores nationwide.

I began reading Armistead Maupin’s Tales of the City

after honeymooning in San Francisco, the city in which these are based. The love that Maupin has for his city shines through, and as somebody who counts San Francisco as one of their favourite cities in the world, I could hardly avoid becoming an avid follower of Maupin’s world.

The start of the series sees country girl Mary-Ann arrive in the big city, all wide-eyed and bushy-tailed. This is the ninth in the series, and while most of the main characters are there, this story focusses on Anna Madrigal’s childhood.

This is a road-trip book, with everybody going off in what appears to be opposite directions. Brian, one of the original tenants of Barbary Lane, comes with his new girlfriend, to take Anna (92) off for what they assume is likely to be her final trip ‘home’, to the town she grew up in as a young man. We learn, through flashbacks throughout the book, about Anna’s youth, and her mother’s friend Margaret, who helped her to understand her differences and gave her the confidence to make the ultimate decision.

Meanwhile, Anna’s live-in friend Jake (introduced many books earlier in the series as a workmate of Michael’s – one of the original flatmates) has another plot in mind, and hopes to take her to Burning Man. The descriptions of Burning Man are phenomenal – while I couldn’t ever imagine myself at one, to have one described by such a passionate participant in the artistic lifestyle, is a fantastic ride. (below is a concept for a central sculpture for this years’ Burning Man) 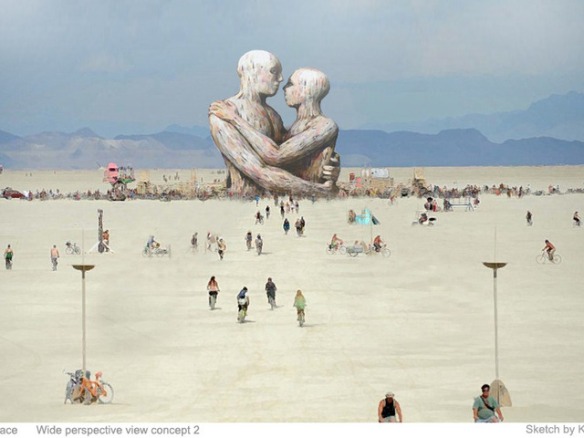 The ending wasn’t the one I expected, and there were some heart-wrenching moments in the process, but it had everybody, and it carried on the stories to possible conclusion with Maupin’s usual panache.

This isn’t a stand-alone novel. What you will get out of embarking on the series though, is well worth it. They are well-written, based around a likeable group of friends who have their loves and losses, and they do a better job than any other set of novels to elucidate the San Franciscan lifestyle. One thing Maupin does well (he is now 70) is to keep up with the cultural trends. Where once gay San Francisco was all bath-houses and indiscriminate sex, segueing very sadly into AIDS; now the main gay couple are a cosily married loved-up couple.

Another good reason to start the series is to open your eyes. As a straight, white, married woman, I haven’t been faced in my life with the choices that gay and transgender people must make, in sometimes challenging circumstances, in order to feel like themselves. I embrace the fact that, in many parts of the world, these choices are no longer as difficult as they were decades ago.