This charming little book is reminiscent of some much 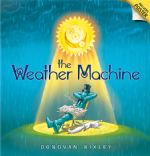 older picture books/graphic novels in its detailed story, which is told entirely through the illustrations. It made me think of a wonderful book, The Great Green Mouse Disaster – not because of the story but more because of the complexity of the illustrations, and the amusing detail to be found in each picture, particularly those where the white cat appears.

At first reading, I was unsure which audience it’s intended for – it’s a bit too complicated just to be a picture book for younger readers, but it’s perhaps not quite sophisticated enough to be deemed a graphic novel. Having said that, though, there is plenty to deal with in this story of a blue man who gets fed up with the changeable nature of the weather on his planet and believes he can improve it by making a weather machine. He certainly manages to change the climate of his environment, several times, generally to disastrous effect! Thus we see that too much interference with nature can be hugely destructive.

The messages are fairly clear – be happy with what you have, learn to deal with problems as they arise, and possibly also consult with others! The blue man certainly did not take a consultative approach, unless the cat counts …….

I ran it past several senior students and the general opinion was that it would suit anyone who was willing to take the time. A colleague thought it would work well with year 5 students, as they would have the language skills to help interpret the pictures through discussion in class.

Overall, I’d rate it merit tending towards excellence, or about 7 out of 10 !

See the book trailer below: http://www.youtube.com/watch?v=ps8pq6vFofc

1 thought on “Book Review: The Weather Machine, by Donovan Bixley”