As Father’s Day is nearly upon us (on Sunday 1 September), I thought it would be worthwhile to get a few recommendations for sons and daughters, as well as grandsons and granddaughters, of books to purchase for the father in their lives.

The images above are part of our eye-catching collection of marketing materials found on www.indiebound.co.nz, and available for upload by member bookstores. If you are interested in using these materials for your Father’s Day promotion, and haven’t yet signed up for Indiebound, let me know on info@booksellers.co.nz.

This was my book of the year when it came out in 2009.  A brilliant book that is about much more than running.  It follows the authors quest to try and understand why he needs orthotics when humans have been on thier feet for thousands of years.  In this quest he discovers a tribe of Mexican Indians called the Tarahumara who are famous for been able to run for miles and miles with just a rubber-type sandal.  He organises a race between the Tarahumara and the best ultra-distance runners in the world.  However, in the telling of the story, Chris McDougall explores so many other angles to the story that it becomes much more than that.  Exploring business, philosophy, evolution, history, amongst other topics, Born to Run is a wonderful book for anyone interested in well written non-fiction.

Boys in the Boat

This is a new release that again, is more than about rowing.  Boys in the Boat is about a young rower called Joe Rantz.  Abandoned at a young age, Joe makes the 1936 US Eight Rowing team and wins gold at the Berlin Olympics.  Like Born to Run, this book is more than just a book about the trials and tribulations of Joe.  While it is the story of Joe and how he came from a dirt poor background and worked incredibly hard through very trying times to make the team, it is also about rowing, and more specifically about the boats that were constructed during those times. These boats were all handmade out of wood. Thirdly, it is placed firmly in the context of the events that were unfolding at this point in history.  Depression, olympics, Nazi Germany and the inkling of conflict were all swirling around during that period.  Brilliantly written, and a fascinating read.

This is an updated edition of the best selling biography.  Jonah’s story is one of the highs and lows of sport.  I enjoyed this when it came out and as one of the fortunate booksellers that had him on a signing session, I can say that it is the most popular and crazy signing sessions that we have hosted!  Perfect for the rugby-loving Dad, this is a easy sell for fathers day.

Stella Chrysostomou from Page & Blackmore’s in Nelson has recommendations for a general audience, and for the traveller dad: 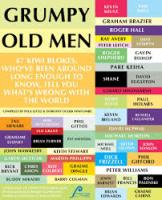 Grumpy Old Men has been a flying off our counter. A collection of essays on all manner of subjects from 47 prominient kiwi blokes telling us what they’re grumpy about. The results vary from entertaining to profound, so will fit the bill for both the wise and witty fathers in our lives. Commentators include Ray Avery, Dick Frizzell, Tau Henare, Peter Williams and Keith Quinn.

If you’re looking for good fiction, John Lanchester’s Capital is capital! Clever writing with a story line that is both entertaining as well as topical. Lanchester is also well known for his non-fiction commentary on the global financial crisis, the most popular being Whoops!

And no Father’s Day would be complete without a book from child to Dad. My favourite is Daddy Lost His Head by Andre Bouchard, illustrated by Quentin Blake. Also good choices; Anthony Browne’s My Dad and Ractliffe & Glassby’s Dads: A Field Guide – reminding us that fathers come in all shapes and sizes.

For the adventuring Dad, there’s the latest from Tony Wheeler. In Dark Lands he travels along the infamous”Axis of Evil” exploring the world’s darkest corners and some troubled nations; including the Congo, Pakistan, Zimbabwe and Haiti.  Always interesting.

A wonderful read for those that love travel, ancient history and nature, The Old Ways by Robert Macfarlane has received numerous accolades. Macfarlane journey across England on foot is an inspring and infromative read.

For the gourmand father, we have a few suggestions from Katrina from Cook the Books.

I know this might not seem obvious, but a lot of dads out there are on there own, and lots of them do like to cook for themselves. Single Serve has to be the best “meals for one” book I have come across, and we love it even more because Penny is a local. The food is not only delicious, it’s also simple and economical.

Most dads fancy themselves as a bit of a grill-guru, and this super-stylish offering from the Parisian restaurant Blend Hamburger is sure to be a hit. From the classics to those with a gourmet twist, Hamburger Gourmet adds a little bit of je ne sais quoi to the humble burger. Not to mention some very delicious looking sides and sweet treats.

What can I say – who doesn’t love Mike? One of the coolest & nicest dads we know, Mike makes the food people want to eat, and then shows them how to cook it. Fast, delicious & healthy – the book is sure to be as popular as the TV show. Great recipes, and great pictures – it’s a winner.

We’re hanging on for the TV series, but we already love the book. Rick takes us on a journey through India on his search for the perfect curry. Stunning photography, with recipes to match. This is Rick at his best, not just a recipe, but the story behind the recipe. Some of the ingredients lists my seem long, but Rick manages to simplify the instructions to make it all seem a bit less daunting, without losing any of the authenticity of the “perfect curry”.

Tim Skinner from Capital Books in Wellington, has a few suggestions for some dads who like non-fiction.

From the beginning of time, 200 milestones in the history of Space & Astronomy. ….an ideal gift for the more thoughtful father with an interest in the heavens near and far.

by Mike Hyde
Published by HarperCollins NZ
ISBN 9781869507473 RRP $39.99
A Kiwi’s guide to the top 50 motorcycle rides in the Land of the Long White Cloud. ….perfect for petrolhead dads with a 2 wheel wanderlust

Fly-Fishing Travels In New Zealand…by the bestselling author of The Trout Diaries, this is a beautiful prose poem on the deeper delights of fly fishing in NZ, without having to get one’s feet wet!

Thank you to Wright’s Booksellers in Cambridge,  Page & Blackmore’s in Nelson, Cook the Books in Auckland, and Capital Books in Wellington for their contributions to this article.

All four of the bookstores we have featured here have online stores, from which you can order these books in plenty of time for Father’s Day. If you would prefer to shop local, please head to our Directory to find your nearest bookstore.